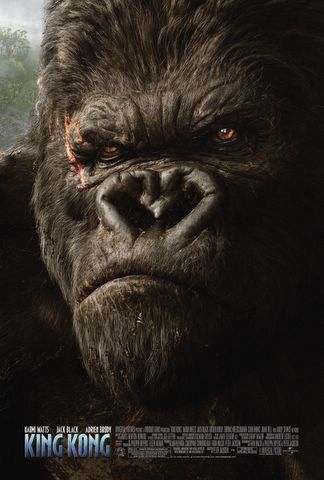 It was good, not SUPER GREAT like the critics are all raving, but good. There were definately several scenes that should have been cut out, not could have... but SHOULD have. There was a scene where they were running with some dinosaurs, it was so damn cheesey, and i am a HUGE fan of Pete Jackson(the director). I'd have to say it was a 6 or 7. If anyone is plannin on taking their kids just a little warning the death toll in this movie could be a close rival with any one of the rambo(well after the first) movies ;)

Favorite quote: "Will there be boobies?" One of the rich producers asking Carl Denham(jack Black) about the movie he's directing.

I don't expect it to be super great. I've never seen the original & I'm not so into a gorilla movie, but it's on my to-see list & I'm sure I'll like it. I wouldn't see it if I didn't know someone I liked in the cast or knew the director. I really loved Adrien Brody in The Pianist, so...and of course Peter J.